All-out effort underway to lift 70m out of poverty 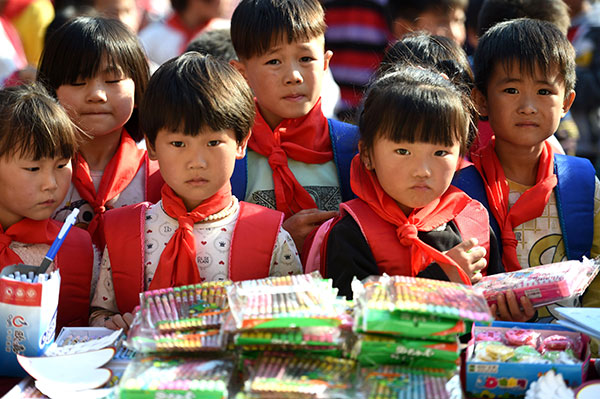 Children from poor families in Bozhou, Anhui province, receive stationery donated by volunteers. China will work hard to lift about 70 million people in rural areas out of poverty by the end of 2020. [China Daily]

China will work hard to lift about 70 million people in rural areas out of poverty by the end of 2020, a senior official from the government's top task force on eliminating poverty said on Monday. The poverty reduction task faces challenges from the economic slowdown and employment pressures, said Hong Tianyun, deputy director of the State Council Leading Group Office of Poverty Alleviation and Development.

However, the government will take all necessary steps to achieve the poverty reduction goal, including lifting 10 million people out of poverty by the end of this year, he said.

Among the steps, Hong told a news conference in Beijing, the government will beef up subsidizing banks to provide loans of less than 50,000 yuan ($7,900) as seed funds to help families in poverty-stricken areas to start their own businesses. Additionally, because 42 percent of poor households are impoverished due to medical issues affecting family members, governments at all levels will improve the social security network, especially the healthcare system.

Moreover, the government will help about 10 million poor villagers who live in geographical areas considered not suitable for living to move out and resettle before 2020, Hong said.

The 2015 Global Poverty Reduction and Development Forum will be held in Beijing on Friday, said Guo Weimin, spokesman for the State Council Information Office. President Xi Jinping will deliver the keynote speech at the forum, which will draw about 300 delegates from China and abroad.

Poverty eradication and development will be an important part of the 13th Five-Year Plan (2016-20), which will set the road map for economic and social development for the next five years, he added.

Li Chunguang, director of the Department of International Cooperation and Social Poverty Alleviation of the State Council Leading Group Office of Poverty Alleviation and Development, said, "Poverty is like a scar on our society, and it's the government's bound duty to eradicate poverty."

He emphasized that the central leadership has vowed to eliminate poverty and build China into a moderately prosperous society in all aspects by 2020.

China's government-dominated approach to reducing poverty has made a remarkable contribution to global efforts to eliminate poverty, Li said, adding that the decline in people living in poverty in China since 1990 accounts for about 70 percent of the world's poverty relief during that time.