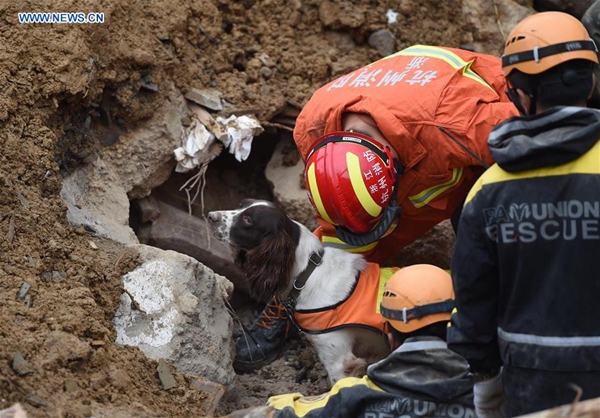 Rescuers and a sniffer dog search for survivors at the site of a landslide in Lidong village of Yaxi township in Lishui, East China's Zhejiang province, Nov 14, 2015. Nine people were confirmed dead and 28 others remained missing after a landslide hit Lidong village of Yaxi township in the outlying Liandu District of Lishui City at around 10:50 pm on Nov 13. [Photo/Xinhua]

The death toll from an east China landslide has risen to 16, with 21 people still missing, local authorities said Sunday.

Only one person has been rescued so far after the landslide hit a village in Zhejiang Province Friday night.

The landslide was reported at around 10:50 p.m. in Lidong Village of Yaxi Township in the outlying Liandu District of Lishui City, the city government said in a press release.

Torrents of mud and rocks buried 27 homes in the village, with 21 houses flooded.

More than 2,300 rescuers, along with 7 sniffer dogs, are helping with rescue work.

Lishui reported heavy rain over the past two days. As of 8 a.m. Friday, average precipitation reached 36 mm. It was still raining when the landslide happened, the local weather bureau said.